This is a complete HPLC column technical guide for 2021.

How to Use Buffers

How to Use Buffers

Table 1 shows pKa values of frequently used buffers in reversed phase HPLC. Ka stands for an acid dissociation constant and pKa is its negative logarithm. The buffer capacity becomes maximum when the pH of the buffer is its pKa.

In general, acetate buffers are prepared by mixing acetic acid and sodium acetate. However, when a volatile buffer is needed (e.g. for LC/MS(/MS)), ammonium acetate is used instead of nonvolatile sodium acetate. When an acid or a base is added to a buffer, the pH change is suppressed by a shift of the equilibrium (I) in the direction of diminishing the increase in the concentration of the added compound.

This buffering capacity is highest when the pH is within pKa±1. For example, acetate buffers have the highest buffering capacity when the pH is between 3.5 and 5.5 because the pKa of acetic acid is 4.56. In practice, buffers are prepared by adding an acid or a base to a salt solution (concentration: a few mM to a few dozen mM) of its conjugate base (e.g. sodium salt) or conjugate acid (e.g. ammonium salt).

The pKa of the analyte is another important factor. If the pH of the mobile phase is around pKa of the analyte, the reproducibility of the retention time becomes low. This is because a slight pH difference between mobile phase preparations changes the degree of dissociation of the analyte. Particularly, it is recommended to set the mobile phase pH smaller than pKa−2 or higher than pKa+2. Fore example, imidazole is a basic compound with pKa of 7.01. Therefore, most of the molecules exist as an imidazolium ion when the pH is below 5, while most of them are in their non‐ionized form when the pH is above 9.

In general, the retention in reversed phase HPLC becomes low when analytes are in their ionic forms. In other words, if the pH of the mobile phase keeps the analytes in their non‐ionized form, the retention becomes relatively strong. For example, imidazole is more strongly retained in the column when the pH of the mobile phase is above 9 compared to the pH below 5 where imidazole is ionized. Base‐resistant columns such as InertSustain C18 enable analysis with such basic mobile phases. Ion‐pair reagents are used to retain ionized compounds.

Therefore, the pH has to be adjusted such that the analytes are ionized. When analyzing imidazole with an ion‐pair reagent, for example, the pH below 5 is typically employed to ionize imidazole. 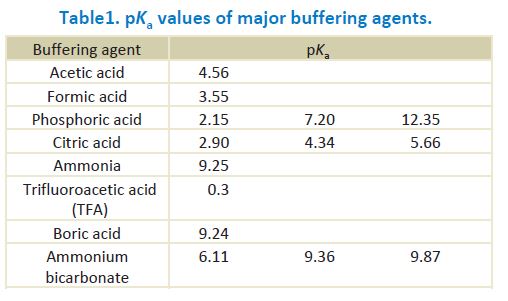 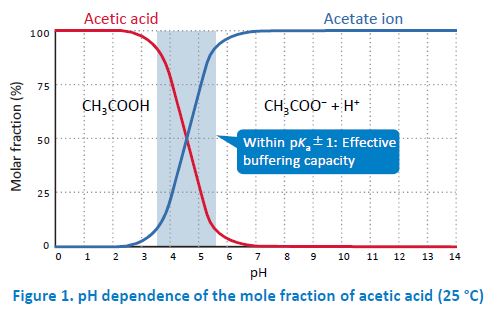 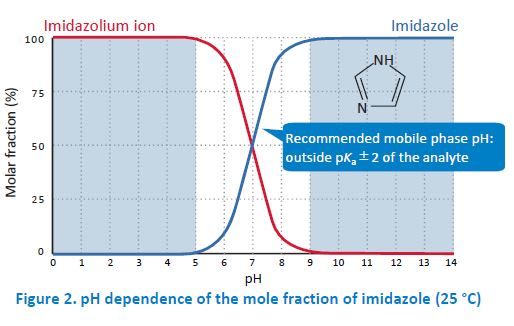 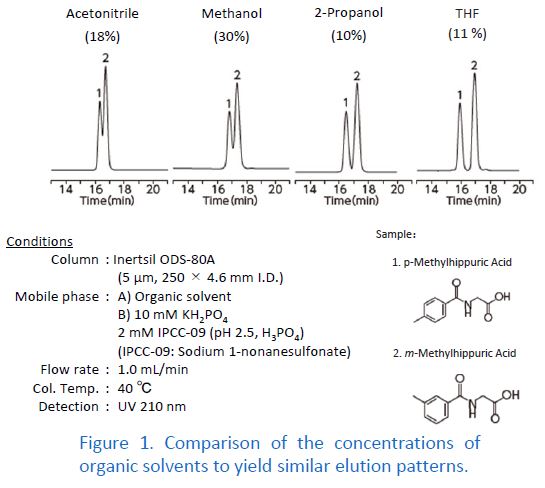 However, note the disadvantages of these two solvents. Acetone is unsuitable for UV detectors because of its higher UV absorption than that of acetonitrile. THF causes swelling in PEEK, which is widely used for HPLC tubing. Therefore, make sure that there are no wetting parts made of PEEK in your HPLC system when using THF. 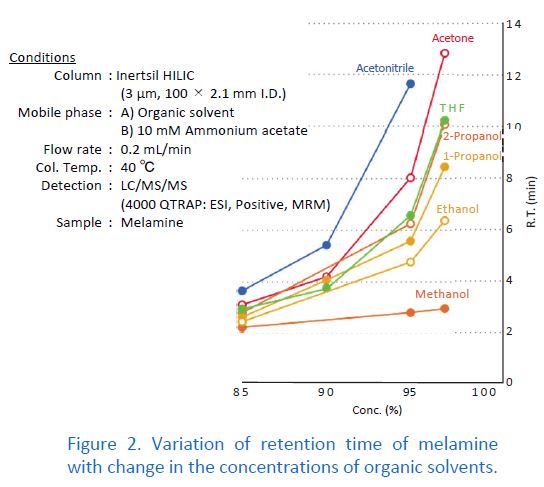 It is common to use mixtures of hexane and ethanol for the mobile phase. However, when the retention for the target compound is too weak, the ethanol concentration has to be extremely low. In this case, 2‐propanol or ethyl acetate, which is less polar solvent than ethanol, is alternatively used.\

The weaker elution strength of these solvents allows for a higher concentration in the mobile phase, which makes mobile phase preparation easy and improves reproducibility.

Normal‐phase columns of InertSustain and Inertsil are filled with a non‐aqueous solvent. When using these columns in reversed phase mode, replace the solvent by following the procedure shown in Figure 1.

Especially if the mobile phase contains a salt, please avoid salt precipitation to prevent damage to the column. 2‐propanol (IPA)and ethanol are typical intermediate solvents and alcohols generate a relatively high column pressure. Please be careful of the maximum operating pressure of the column and adjust the flow rate if necessary. 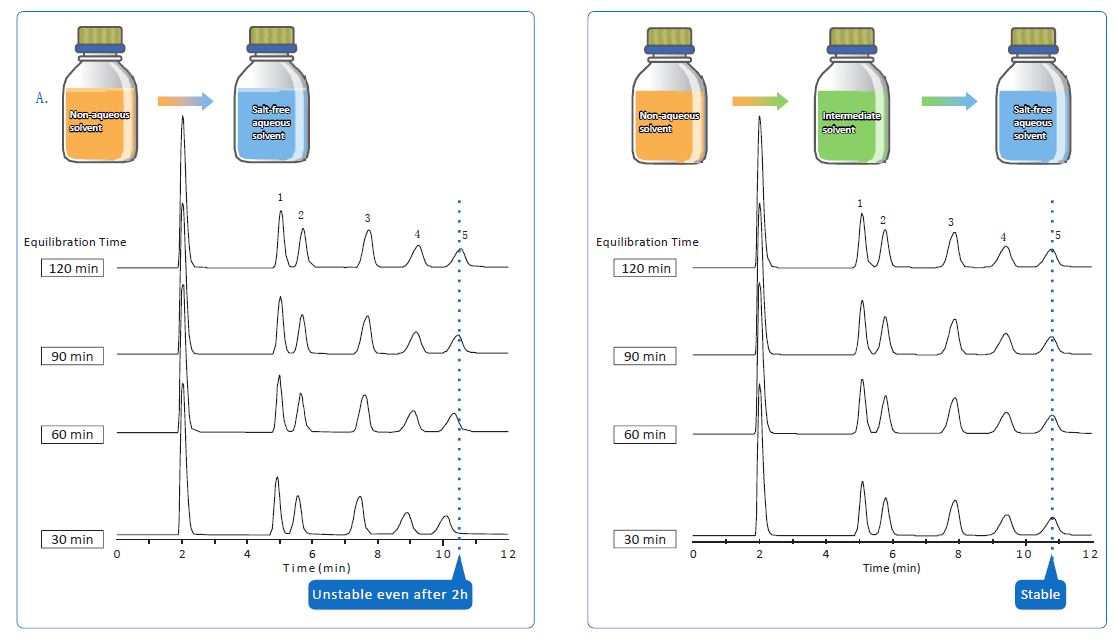 When making a connection with either stainless steel tubing or plastic tubing, the tubing has to be pushed toward the end fitting. If the tubing cannot reach the bottom of the end fitting, as shown in Figure 1, there is a dead volume left in the connection and peaks are distorted.

Plastic tubing is so soft that it has to be carefully cut to avoid a diagonal or compressed cut surface, which can make a dead volume or pressure increase. Our “clean cutter” can keep the cut surface clean. 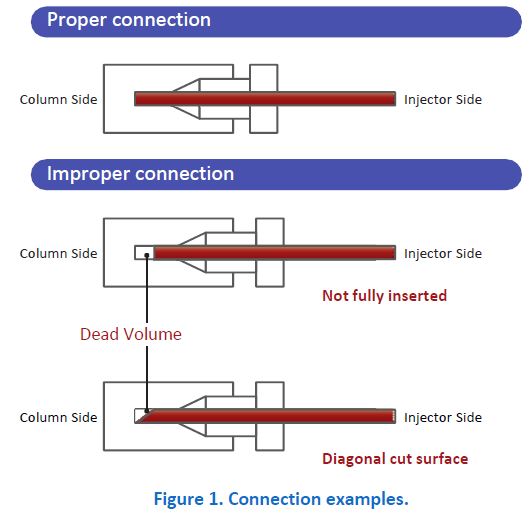 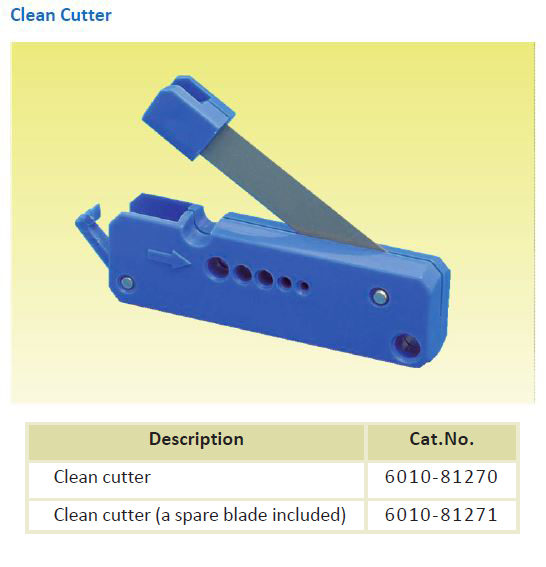 When a connection consists of stainless steel tubing and metal parts, it is sometimes impossible to change the positions once the they are fixed. If this tubing is connected to a column with a different end fitting type, a dead volume can be created.

Most UHPLC systems employ UP type fittings instead of Waters type fittings, which are commonly used in conventional HPLC systems. In such a case, it is convenient to use fittings compatible to any end fitting, 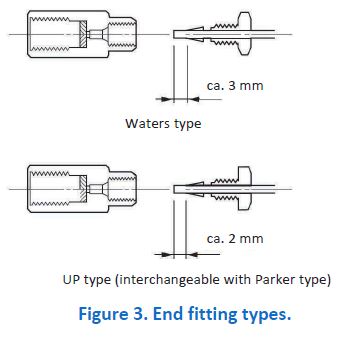 Large I.D. leads to peak dispersion between the injector and the column, and between the column and the detector. However, too narrow I.D. increases the system pressure. Choose proper I.D., depending on your purpose.

The retention factor k is calculated from the retention time tR and t0. t0 is the elution time of an unretained compound in the HPLC conditions. Unlike tR, retentivity among various column lengths or flow rates can be compared.

Resolution Rs describes how well two adjacent peaks are separated. In general, Rs ≥ 1.5 is defined as baseline separation. Rs is given by the equation below with the retention factor k, the theoretical plate number N and the separation factor α:

Peak asymmetry (Asy) can be expressed as follows: 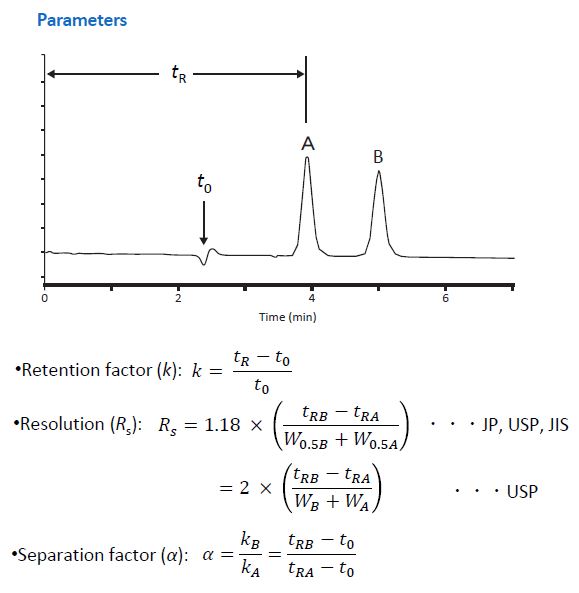 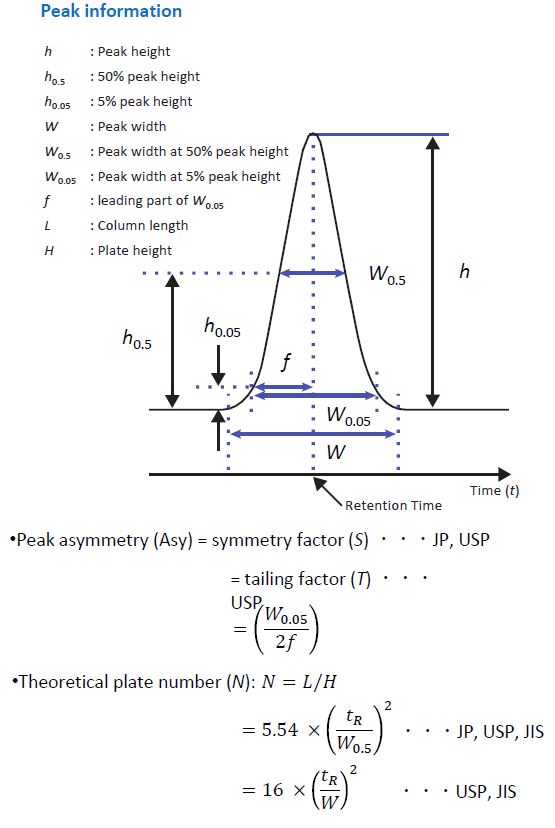